Ella Schulitz of Simsbury is a trailblazer, the first female Eagle Scout in the state of Connecticut.

Schulitz, 18, of Troop 174, Connecticut Rivers Council, will join the Boy Scouts of America’s first nationwide class of elite female Scouts at a ceremony set for Monday.

The Simsbury High School senior joined BSA Scouts as soon as she could two years ago when the program for 11- to 17-year-olds began accepting girls. Schulitz said her enthusiasm for Scouting started in third grade when a representative talked to her class.

“I was really interested because he spoke about adventure and doing fun things with friends,” she said.

She told her parents that day that she wanted to be a Cub Scout, but girls could not join then. In middle school, Schulitz joined Venturing, a co-ed Scouting program. Joining Scouts BSA in February 2019, she said, felt like the logical next step.

For her Eagle Scout project, Schulitz built a “gaga pit” outside Latimer Lane Elementary School in Simsbury. Gaga is a variant of dodgeball played in a fenced-off area. Before construction, Schulitz had to plan the project and gain approvals, a good introduction to a milder form of bureaucracy, her father, Rick Schulitz, said.

Only 4-6% of Scouts attain the Eagle rank. Each female Scout joining the nation’s inaugural class will have “Feb. 8, 2021” marked on her official record and Eagle Scout certificate as the day she completed the rank. The date also coincides with the 111th anniversary of the Boy Scouts of America.

One of three siblings with a Scoutmaster father, Ella Schulitz said she is proud of the top rank, but being the first female Eagle Scout in the state is not important because she was not competing with anyone.

After graduation, Schulitz said she plans to pursue studies in electrical engineering. 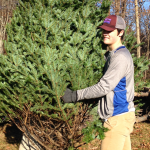 My Eagle Project consisted of two smaller projects, both for the Simsbury Community Farm operated by Gifts of Love. First, I built fourteen trellises to help stabilize vertical growing plants near the pavilion. They’re basically mini ladders that vine-like plants can creep up and have something stable to grow on, other than the pavilion itself. After that, I built an outdoor trash receptacle for the trash and recycle bins. The receptacle has many
functions. It protects the trash and recycle bins from outside threats such as wind and large animals, and allows for the easy transport of both bins at once (the receptacle is on wheels). It will be really useful when outdoor events (especially those using the pavilion) get into full swing at the farm. People will no longer have to worry about the trash cans getting blown
over by the wind, and both bins will now be in the same place!

I would like to especially thank Ms. Marshall, my family, Mr. Burrows, and the Doyle family, for helping me get the project off the ground and helping me tackle all the problems that came up along the way. I couldn’t have completed the project without you guys!
N

The Simsbury Community Farm, run by Gifts of Love is a non-profit that I decided to help with my Eagle Scout project. They were trying to make an outdoor classroom with 6 benches. One of the main reasons I actually chose to make benches was because of how little I knew about making them. Working with lumber was pretty new to me and I knew I had a lot to learn in order to finish my project. Knowing all of the materials and supplies, figuring out who could help out and how the benches would even be made were also a part of planning. I must thank Mr. Mulligan, a skilled craftsman, who was essential to the assembly process and who let me use his chop saw. I can say undoubtedly that there is no better friend to a big project than a thorough plan. I felt very proud after the benches were made and fully stained. To my pleasure, the farm loved the way the benches turned out and even put them to more use than just the outdoor classroom. My eagle project was filled with many emotions from frustration and procrastination to eagerness and satisfaction. It was hardest for me to start the project and get things going because of how challenging the tasks seemed to be, but once I got into it, it was not nearly as cumbersome as I had thought. I know I learned valuable lessons from this experience, like the usefulness of specifics and the uselessness of procrastinating. Lastly, a shout out to my Mom & Dad, who pushed me along and were always there with their support.

For his service project, Nathan created a bicycle parking area at Squadron Line School. The new parking area allows students to bike to the school while avoiding carpool traffic, thereby enhancing safety and promoting exercise. Nathan worked with Mr. Matycyk, the school’s vice principal, to design the project, which consisted of the building of a crushed stone pad for a bike rack and the refurbishment of two existing bike racks.
Nathan began the project by determining the optimum location and design of the crushed stone pad. He also evaluated options for repair and beautification of the existing bike racks, one of which would remain at the front of the school while the other would be moved to the new pad at the rear. Nathan estimated materials and costs and set a fundraising goal, which he achieved through generous contributions from relatives and the families of Troop 174. The new pad required a workforce of scout volunteers to dig up and remove sod from a 14’ x 20’ area, which was then covered by over a ton of crushed stone to create an all-weather mud-free parking area. Refurbishment of the racks involved replacing missing pipes on the bike racks, straightening bent ones, removing rust, and painting the racks.
Once completed, the refurbished racks and new parking area are a significant enhancement to the safety, convenience, and appearance of the school and will hopefully be enjoyed for many years.