Tonight, at Simsbury United Methodist Church, numerous family and friends came together to enjoy each other’s company and great barbecue from Bear’s Barbecue. Oh yes, and also celebrate the scouts moving up in ranks at the annual Court of Honor.

Eric Wellman, First Selectman of Simsbury, was the guest of honor, giving a lovely speech to the four new Eagles to congratulate them and elevate them as an example of Simsbury residents. Further awards, recognitions, and congratulations were given by several others, including the Simsbury American Legion, several United States cabinet members, and two former Presidents. Senator Chris Murphy even passed a long a flag that had flown over the Capitol building this past summer.

All in all, it was a fun filled evening filled with laughter and memories, and ending with cake. What could be better?

Thank you Pioneer Valley Indoor Karting for hosting a great day of racing! 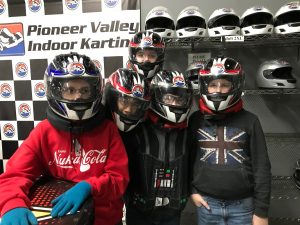 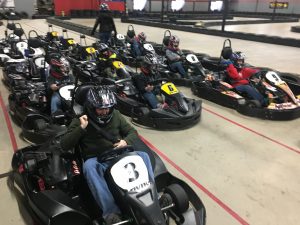 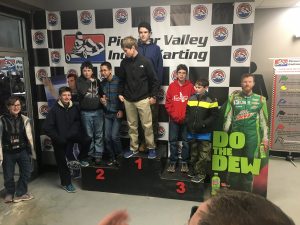 What a great weekend of Scouting! Perfect weather, skills challenges, great cooking plus a jam session. The boys even got to retire a few flags (and save one with 48 stars).

Troop 174 started out above People’s Forest in Barkhamstead, and canoed roughly 8 miles down the Farmington River, ending in New Hartford. The boys brought their families to enjoy the end-of-summer weather, and stopped halfway down the river to have lunch together and play in the water. At the end of the canoe trip, everyone returned to People’s Forest to enjoy a night of camping.

Although this canoe trip was enjoyable, the boys used this time to work on their merit badges and rank advancement by working on things like their cooking, knot-tying, and camping skills.

Simsbury Trip 174 meets every Wednesday at 7pm at the Simsbury United Methodist Church. Feel free to come by and join the fun!

Simsbury Boy Scout Troop 174 arrived at the ski resort in Stowe, VT, on Friday. We first enjoyed a high-ropes challenge course involving cargo ropes, tightropes, and swings, and ended with the boys and their families ziplining through the trees. After the fun in the trees, they set up camp, cooked, and enjoyed each other’s company.

On Saturday, the boys hiked up Mount Mansfield to enjoy the view, and upon returning went for a dip in the pond. On Sunday, the trip was rounded out with a tour of Ben & Jerry’s before heading home. You can check out the images from the event here.