Adam was born on April 3, 1989, in Nashua, NH. He moved to Simsbury, CT in the fall of 1996. Adam is in his senior year at Simsbury High School. During the past two years, Adam also took classes at the Greater Hartford Math and Science Academy. This fall, Adam will be attending the Honors College at Hofstra University. Adam’s Cub Scout experience began when he was in the third grade at Tootin’ Hills School. Monthly meetings occurred at Palmer Hall and Adam earned the Arrow of Light, crossing over to Boy Scouts and Troop 176 while in Grade 5. Troop 176, a small troop led by Don Eaton, disbanded after a few short years. Adam, his troop leader, Don and several other boy scouts, merged with Troop 174, an active, promising troop. Participation in this organization has significantly impacted Adam’s growth in the areas of leadership and responsibility.

In addition to Scouting, Adam is an accomplished swimmer, earning his varsity letter on the Simsbury High School Swim Team as a freshman. Adam is a certified Lifeguard and Water Safety Instructor and spends his summers guarding and providing swimming lessons at Mills Pond Pool in Canton, CT. 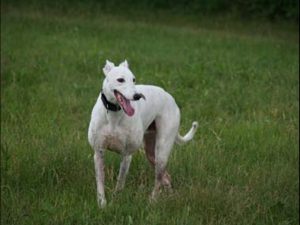 For Adam’s Eagle Project, he chose a community service project that was very close to his heart, CT Greyhound Adoption. In September 2004, Adam’s family rescued a retired greyhound from the Shoreline Racetrack in Bridgeport, CT. He learned that those Greyhounds that are not placed in homes following their career at the track, spend their days in crates and may even be put to sleep where local state laws allow it. To help with this agency’s important cause, Adam designed and built three foldable presentation boards and one stand-alone easel and presentation board for CT Greyhound Adoption (CGAP). These boards will be utilized during “Meet and Greets” at local PetCo’s and other events to inform the population about greyhounds available for adoption, as well as details regarding the plight of greyhounds and the need for families willing to give these docile animals a future. During Adam’s project, he obtained help from several friends and fellow scouts. He would like to thank the fellow greyhound supporters who made donations for his project without which his project would not have been possible.

Adam would also like to thank everyone who helped him along the way to attaining Eagle, especially Mr. Civitillo, Mr. Collins, Mr. Fogle, Mr. Eaton, his family and his friends from the troop. Thank you all very much.